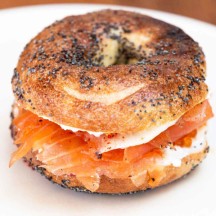 Beygeling (or Bageling) definition: Inserting a Jewish phrase or concept into a conversation in order to determine whether the other person is or isn’t Jewish. Or to let them know that you’re part of the tribe.

A couple of weeks ago my good friend was chatting at work with a group of colleagues about the best bagels in town. During the heated debate about the right consistency of a perfectly chewy bagel, one colleague, upon expressing his two cents, turned to my friend and exclaimed “YOU know what I mean!” After some all-around confused stares, including that of my friend’s, the colleague explained his remark by saying, “Well you’re Jewish aren’t you?”

Aka, you must be a bagel expert.

So before I get into the concept of bageling, I’d like to address one thing: WTF do Jews have to do with bagels?

A Brief History of the Bagel

The bagel (baygle in Yiddish) apparently originated in the Jewish communities of Poland in the 17th century. Earliest documented mention of the word is 1610, in regulations issued by the Jewish council of Krakow, which stated that bagels were given as a gift to women in childbirth (don’t ask me why). When the Jews emigrated to America en masse from Europe in the early 20th century, they brought the bagel with them. And the rest, as they say, is history.

Jews are now officially associated with bagels and that’s how the term bageling (aka dropping hints to find out if someone is Jewish or to let them know that you are) came to be. I guess it would be akin to croissonting a Parisian, currying an Indian or poutining a Canadian.

I distinctly remember the first time I got bageled. I was sitting in my first class of graduate school when a fellow classmate turned around, held my gaze and asked “So, Sarit how do you like the holiday Purim. It’s my favorite Jewish holiday!”

I stared blankly. Here was a guy whose last name did not sound Jewish yet seemed to have knowledge of a lesser known Jewish holiday that typically occurs in March, asking me about it the day after Labour Day. I found myself a Yid, I see.

“I love Purim as well.” I replied shyly. And alas, a budding new friendship had grown and developed from that moment on.

Just kidding. That was the extent of our interaction for the next two years. But still, I remember it as a really nice gesture by a really nice individual.

I’ve since had my fair share of bageling moments at: work, in elevators, and in hole-in-the-wall artisan markets of Peru.

So here is my question – why do we bagel in a room full of strangers?

I have a few theories (none of which are backed up by research, yet). Here they are:

It’s human nature to search for commonalties among strangers to gain an enhanced sense of belonging. BUT, we live in a politically correct world and point blank asking someone you barely know if they’re Jewish/or part of any religion for that matter is taboo. Bageling is smooth enough.

Jews have a thing for having each other’s back. As a result, bageling was created to serve as a highly effective networking tool. Find the Yid in the room, hire them, or do business with them.

3) Bageling: A Practical Response to History

When I started contemplating this theory, I remembered my husband’s brave grandmother, a holocaust survivor. She had spent some time in hiding with a gentile family in Poland under the guise of a teacher. One evening she met a gentleman in the village who she sensed was a fellow Jew in hiding. Wanting to reveal her true identity to him, but afraid of being exposed, she began to hum a classic Jewish melody (kol nidre tune). She then scribbled on a piece of paper a name of someone she had been searching for that she knew may be in hiding in the outskirts of the village. The gentleman understood her message and subsequently brought her to a hiding place in the forest where she survived the remainder of the war with a group of fellow Jews. She stayed connected with these individuals the rest of her life. *

This leads me to conclude that in the past Jews bageled out of necessity. Today, Jews seek other Jews for all sorts of reasons, but being discreet is a centuries old habit we can’t seem to break.

A Word on Bageling Fails

It’s hard to talk about bageling without mentioning how it doesn’t always work the way you planned.

My Greek-Orthodox colleague once accidentally got bageled. Perhaps it was because of her Mediterranean look or her spunky middle eastern-style personality, or both.

She was in line at a bank the morning of what is arguably the most important day of the year for the Jewish people: Yom Kippur (Day of Atonement). On this day, one may find completely unaffiliated Jews in synagogues all over the world praying and fasting. Even if you break your fast on a Big Mac, Yom Kippur is just one of those days. So she’s standing in line and as she hangs up after chatting on the phone, the guy behind her smiles and says “You and me, we really shouldn’t be at the bank today…” Being well-versed about the day she laughs and says “I totally get what you’re talking about…but I’m not Jewish. You’re on your own buddy.”

And there you have it. A Yid, searching for a fellow Yid on Yom Kippur at TD bank. If this doesn’t speak to the magnitude of the desire to find kin under any and all circumstances, I’m not sure what does. I just love this story, and the fact that she couldn’t wait to tell me when I got in the office the morning after YK.

So…if bageling leads to networking and business deals, a new job, or even a new friend, I’d say it’s worth dropping the hint.

P.S: If you’re wondering about the lox and cream cheese combo, well apparently that is the kosher version of the American Eggs Benedict classic, except hollandaise sauce was substituted for cream cheese, and the ham for smoked salmon…Learn something new every day!

* I was privileged to hear my husband’s grandmother’s first-hand account of this incident that took place nearly 75 years ago, thanks to Steven Spielberg’s Shoah Foundation, and to her incredible willingness to share and record her story.

One thought on “What’s in a Bagel?”

I was born in Israel and grew up in Toronto. Being the only Orthodox Jew at work, I began to chronicle my (awkward) experiences of being observant in the modern workplace. After making aliya in 2019, I broadened my repertoire of writing to discussing all things Jewish in the Modern World that we live in such as travelling, living in Israel and more.