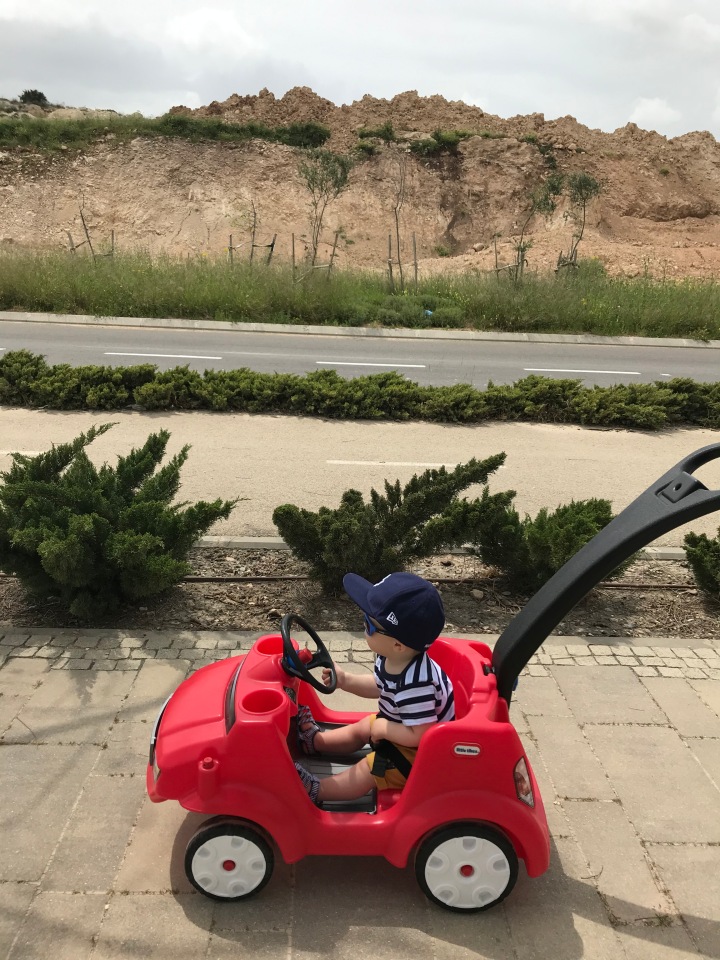 It’s been six months since our move to Israel, and obviously things got interesting in the last couple of months. Israel took a pretty strong stance on handling Corona, but it seems that most places around the world have since caught up and we are now all in the same boat.

Over here, it’s currently beach weather (minus the beach). It is HOT. Ami, our little one year old, is particularly enjoying rides around the block in his sleek red car. He’s got his sunglasses on, and with one hand on the wheel, he blabs his whole way through town, shrieking at cats and passersby. He is obsessed, and it makes me happy that the little guy is completely oblivious and having the time of his life.

As for us, we are coping in the same way everyone else is under lockdown conditions. Cooking, eating, going for walks, being grateful for our health, with going a little crazy in between stressing out about uncertainty, and back to cooking, eating…We are essentially chefs. Ami has enjoyed tuna steaks with balsamic glaze, risotto balls, fish and chips, and more. We bought a Traeger smoker just days before all non-essential stores were shuttered but the smoker has proven to be essential indeed.

We’ve slow-cooked ribs, brisket, chicken wings, honestly you name it. These meats take hours and hours and, turns out, babysitting them on the grill is a very effective way to pass time. Zvi is now a spice master and makes his own spice mixes, or rubs, as we say in the meat world. I’m the official sous-chef and I help with the meat temperature checks and photograph the final products.

Oh, and Zvi is growing a beard. He calls it CoBeard-19. Feel free to donate. All proceeds go toward the purchase of more meat.

I have to say, watching Israelis cope has also been fascinating. During one of our walks over Passover, we noticed that there were tents pitched in almost every balcony. Apparently, April is camping season here in Israel. That same evening, our neighbours had not only pitched a tent in their garden, they also put on music and set up a glowing camp fire. The Israeli motto is: If you can’t go to a campsite, you bring the campsite to you. But this wasn’t just one family’s idea. This was an entire neighborhood, sleeping in tents.

Also, I had no clue that young Israelis, I’m talking like ages nine to fourteen, are so active. They will do the same hundred meter loop over and over again, with their cool masks  that have skulls on them. I’ve seen some of these kids on runs, just out for a jog, no big deal. But the most impressive is our next door neighbour, who we are pretty sure is training to join Israel’s national soccer team. This teen has the stamina of a serious athlete. Every day, as soon as Zoom school ends, he begins his intense circuits with a soccer ball in his small backyard, all while his adorable little brother tries to keep up. This goes on for a few hours. He blasts the music, but we don’t really mind. Honestly, it’s motivating. I hope he gets on the team, or whatever it is he’s trying to accomplish. And yes, we do have a clear view of our neighbours’ backyards, I’m not snooping, I swear. It’s pretty hard to miss from my kitchen window.

But all this exercise is contrasted by the fact that on the night Passover ended, the government literally had to police bakeries and keep them shuttered for fear of massive crowds hitting the streets trying to get their hands on a warm boureka.

And that’s all for now. Oh, and the eggs are back in the stores. So we’ll probably be making a shakshuka next.

Stay safe and healthy everyone.

One thought on “Our Move: The Six Month Mark”

I was born in Israel and grew up in Toronto. I'm a writer at heart and a few years ago I started blogging about the experience of being Jewish in the modern world. My work has been featured on the Times of Israel and the Orthodox Union Magazine.